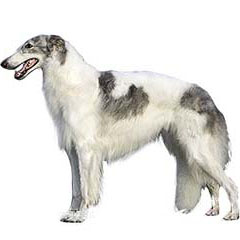 Formerly known as the Russian Wolfhound, the exact origins of this breed are buried in the historical dust of old Russia. There are experts in the breed who see a striking resemblance to the earliest dogs, the Greyhound type, pictured in ancient Persian and Egyptian art. It is further held that the unusual rough coat of the Borzoi evolved from the smooth coat of the Greyhound through centuries of adaptation to the extreme Russian winters; others surmise the breed is the result of cross-breeding, perhaps with wolves. The Borzoi is a hound and has been classified in the Hound Group by the American Kennel Club. However, there are two unofficial sub-categories of hound:Scent HoundsandSight Hounds, so named for their methods of hunting. Sight hounds (sometimes called gazehounds) include the Borzoi along with such breeds as the Afghan Hound, Greyhound, Ibizan Hound, Irish Wolfhound, Pharaoh Hound, Saluki, Scottish Deerhound, and Whippet. The first Borzoi imported into the United States was “Elsie,” purchased in England in 1889. The Standard was first fixed by the Russian Wolfhound Club in 1905, and continued on by the Borzoi Club of America.

Although Borzois have been seen in the United States mostly as a show dogs and pets, they have been used in the American West by ranchers and sheep men to hunt coyotes and protect their flocks and herds. Beyond ostentation, these tall beauties are easygoing and capable of staying put for many hours in the position in which they were placed. Because they are not very active indoors, they adjust to city life quite well, provided they are exercised adequately. They are quiet, dignified animals who can be aloof, yet are very willing to please. They are not the best breed for young children because they do not respond well to rough treatment, and can become aggressive and snappish if pushed too hard during the vigorous play of small children.

Mature males stand at least 28 inches from the top of the shoulder to the ground, ranging in weight from 75 to 105 pounds. Females stand at least 26 inches and weigh between 70 and 90 pounds. Their coats are long and silky. They may be flat, wavy, or somewhat curly, but never woolly. The coat color is most often white with markings of lemon, tan, gray, or black. The AKC Standard allows for any color or combination of colors. Their small ears lie back on the neck and go out to the sides when something attracts their attention. Their eyes are dark in color. They have an intelligent look to them but stay soft in their expression. Borzois are always elegant and graceful, but with combined muscular power and extreme speed. When gazing off into the distance, they may appear to be daydreaming but are actually looking at something to chase.

Borzois are somewhat stubborn dogs and consequently must be trained as early as possible. They are totally unreliable off leash given their instinct to chase anything they can see running off in the distance. They are fun-loving and respond instantly to racing games or anything they perceive as something to hunt and chase. Once this instinct is set in motion they are highly energetic. They do not think about their own safety and will run into traffic without a moment's hesitation. For this reason, it is absolutely necessary to obedience-train them in order to gain control. It is best to give them vigorous daily exercise or keep them in a fenced-in place to run around off leash. They are easier to train after they have burned up some of their energy. You cannot administer firm leash corrections with this breed. Over-correcting them results in poor results and erodes the bond between you. They will perform for you if you lavish them with a great deal of praise every time they respond properly to the commands you have taught them. Be gentle with the leash. Show them what to do and they will do it.

Their double coat is very thick and requires brushing and combing approximately three times a week to avoid mats and tangles. They shed at a moderate rate but a warm bath and shampoo as the seasons change will help reduce the impact. Little trimming is required, but check their nails for length.