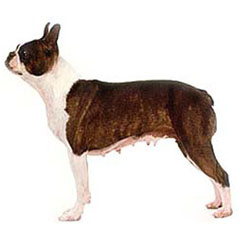 Bostonian Robert C. Hooper developed this breed, circa 1870. His original dog, “Hooper's Judge” is considered to be the ancestor of all modern Boston Terriers. “Judge” was a cross between a Bulldog and an English Terrier with a strong resemblance to the Bulldog. In 1889, the breed was firmly established by a group known asThe American Bull Terrier Club, which entered them in dog shows as “Round Heads” or “Bull Terriers.” After objections from Bull Terrier and Bulldog breeders claiming this new breed was not at all like theirs the name was changed. The Boston Terrier Club of America was formed in 1891 and within two years they were accepted by the American Kennel Club as an official breed for their Stud Book. By 1900, the breed began to look more as it does now, with more of a terrier look than a Bulldog look. The Boston Terrier is among a very few breeds developed in the United States. Early in the breed's infancy it became known as “the American Gentleman.”

Boston Terriers are gentle dogs but actually quite rugged. It is their gentle, normally quiet behavior that makes them so perfect for those who appreciate a calm companion ready to settle in. This breed apparently has an affinity for elderly people and non-athletic types, usually those who work at home and need a quiet atmosphere in which to concentrate. Nevertheless, the terrier component adds pepper to the recipe with a dash of stubbornness, a streak of aggressiveness toward other dogs and sensitivity to rejection and criticism. Some are excessive barkers, especially at other dogs. They consider all dogs that do not live with them to be violators of their territory and will initiate a fight unless corrected. Interestingly, they get along well with cats. They snore. They snort. They wheeze as do most breeds with pushed-in noses. For some owners these are lovable behaviors. For others, they are behaviors to be endured. Boston Terriers are good-natured dogs with lovable mannerisms. Like Pugs , they are often seen in pairs. Bostons are sociable and make excellent companions. They are also effective watchdogs because they will alert you right away if a stranger enters your property.

Despite the fact that they are the result of a cross between the Bulldog and the English Terrier, they do not resemble either. Their small bodies are compact and well proportioned to their head and legs. These lively dogs are well suited for city living and can be scooped up into one's arms when necessary. Their facial expression is alert and kind without the slightest suggestion of threat. The Boston coat consists of short, smooth hair seen only in brindle (tawny or gray with streaks or spots of a darker color), seal, or black with white markings. They are disqualified for show in solid colors without the white markings on the muzzle, the collar, chest, fore and hind legs below the hocks. A perfect Boston Terrier looks as though he were wearing a tuxedo.

Because of their stubborn streak, you must train them with a firm, constant hand but at the same time with sensitivity and gentleness. This requires patience, persistence, consistency, and a sense of fairness. Many Boston Terriers have a difficult time with housebreaking. As a result, you must watch them carefully during house training and rush them outdoors at the slightest indication of their need to relieve themselves. Lavish praise is the most useful tool for training Boston Terriers.

Because of their short, smooth coats, all that is required is a quick brushing once a week and perhaps a rubbing with a damp towel. Clipping and trimming the coat is never necessary. This is a very clean breed of dog and has no “doggie” odor.

Bostons are predisposed to a variety of heart ailments, respiratory problems and heatstroke caused by partial upper airway obstruction and the pushed-in nose anatomy. Ocular infections and injuries can develop as a result of their protruding eyes. Hyperthyroidism, various skin ailments, and epilepsy have been reported in Boston Terriers.