"The Cattle Driver from Belgium" 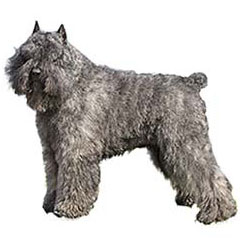 The documented history of the Bouvier des Flandres, also known as the Belgian Cattle Dog, begins in the late 19th century. Although their original raison d'etre was to drive cattle, the Bouvier soon proved his mettle at pulling carts and protecting farms. But the Bouvier was even more versatile than his origins suggest, and during World War I, these large and intimidating dogs served as couriers. Unfortunately, so many Bouviers lost their lives during that conflict that the breed was driven almost to the point of extinction. However, devotees began to re-establish the breed soon after the war, only to encounter danger once more when World War II broke out and Bouviers once again served as couriers – this time for the anti-Nazi resistance movements of several occupied northern European countries. Meanwhile, the Bouvier was becoming established in the United States. The American Kennel Club recognized the breed in 1929, but the Bouvier became much more prominent in the 1940s, when the breed's heroic role in World War II gained recognition. Today, Bouviers aren't particularly popular, probably because of their large size and heavy grooming needs. They are the 86th most popular breed.

Like most herding dogs, the Bouvier is devoted to his herd – even if that herd consists of people instead of cattle. That said, this breed is eager to please, and generally is more than willing to learn. However, the dog is known to exhibit occasional stubbornness and can become bored easily. Such boredom can turn into destructiveness, especially if the dog does not get sufficient exercise. By contrast, the well-trained, well-socialized Bouvier can excel in many canine sports and activities, including herding, search and rescue, obedience, carting, police work and even competitive obedience.

The Bouvier des Flandres is a large dog who stands between 23.5 and 26.5 inches tall, and ranges in weight between 65 and 130 pounds. The dense, rough double coat can range in color from fawn to black; other acceptable colors include salt-and-pepper, gray and brindle. The ears are usually upright, and he sports a heavy beard and mustache.

A Bouvier thrives when schooled by a confident but positive trainer who realizes that the way to this dog's heart and mind is through his tummy. Gastronomic bribery gets one everywhere with this breed. Just don't try to out-stubborn him.

Although the Bouvier sheds relatively little, this breed is by no means low-maintenance. Instead of falling in little dust bunnies everywhere, the Bouvier's soft undercoat stays caught beneath the outer coat, which results in painful mats. To prevent this, a Bouvier should be brushed and combed at least once a week. Weekly ear cleanings and pedicures, and periodic baths also are important. The Bouvier was bred to work all day alongside his handler; a perpetually sedentary life may send him into the doggie loony bin. Vigorous daily exercise required!

Like all purebred dogs, the Bouvier has a few genetic health issues. The most common are hip dysplasia, glaucoma, cataracts, entropion (inward-turning eyelids), bloat (a potentially fatal stomach-twisting emergency) and hypothyroidism. Dogs intended for breeding should receive OFA and CERF screenings before embarking on pooch parenthood. Ask your breeder to see proof of these tests.

Pastrache, the lead canine character in the movie "A Dog of Flanders"(1999); Caesar, guest on Letterman's "Stupid Pet Tricks"