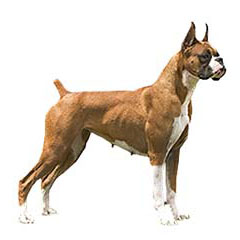 The Germans developed many breeds suitable for helping with various jobs. Its ancestors included the Bullenbeisser, a breed used for hunting big game, and the English Bulldog. In the 1800s, the prototype of the Boxer was promoted by three men, Konig, Hopner and Robert, who brought the breed recognition throughout the world. Although Boxers were originally used as a farm helper, service dog or household guardian, today they are mainly companions, who might bark a warning. Legend has it that the breed's name came from their habit of dancing on two legs and push playing with their front paws. Whether true or not, two Boxers who meet are often seen carrying on the tradition.

Well-bred Boxers are happy, always eager to join in wrestling or a game. They dote on children, especially “their” kids, but may roughhouse too much for little ones. Playing the clown one moment and hitting a noble stance the next, Boxers fit in almost any role. They might be too active for some people, but those who like a good romp, whether playing ball or hide and seek, won't find a better buddy. Boxers can be hesitant around strangers but will seek attention from their own family.

Clean lines show off the Boxer's well-muscled body. Her fawn or brindle coat, which is usually trimmed with white markings, is short. Eyes are dark seeming to issue an invitation to play. Boxers in the Western Hemisphere are cropped and docked. In many other countries, no cosmetic surgeries may be performed, so they are au natural. Since white dogs were used in the development of the breed, white puppies can appear in litters. Care must be taken in determining that deafness is not a problem with these pups.

Some Boxers are determined to do things their way, so training for control is recommended. Happy for any kind of attention, Boxers often look upon obedience routines as sometimes tedious – but it gives them time with their people. Make training interesting with play breaks, and you'll have a happy camper.

Boxers stay spiffy nearly all by themselves. As with other breeds, nails should be trimmed and ears and teeth cleaned. Otherwise a swipe of the brush or hound's glove keeps them shiny. Talk to your veterinarian about the type of food needed to keep a Boxer healthy – some can cause your Boxer to be gassy and not as welcome as the lapdog they like to be.

Parents should be OFA and CERF registered. Some lines suffer torsion, heart problems or bleeding disorders. Sadly, the number one health concern is cancer.