Dr. Lloyd graduated from the University of Georgia, College of Veterinary Medicine in 1987. With an obsession for perfection, he spent considerable time and resources gaining expertise in Internal Medicine and Surgery of the dog and cat. Affording the best care possible has not come cheap, as Dr. Lloyd invested in a surgical Laser unit to provide the most compassionate and technically advanced care to our patients, not to mention the state-of-the-art anesthetic agents, and anesthetic and monitoring equipment. The rapid growth and success of the practice has since allowed for the addition of many more technologies to further expand the diagnostic and treatment capabilities of the hospital and its doctors, including lab equipment, digital radiography, ultrasonography, endoscopy, and Therapy Laser. It also became necessary to add 5 more doctors to the Staff!

The son of a US Air Force Officer, Dr. Lloyd grew up abroad, having lived in West Germany, Japan, and Okinawa for most of his childhood. When his father retired from the Air Force, the family returned to Georgia where Dr. Lloyd’s mother’s family had considerable farm land. After finishing high school and the University of Georgia for both undergraduate and graduate studies, Dr. Lloyd wanted to pursue mixed animal practice in a more “reasonable” climate than the very hot Georgia summers. After visiting Kentucky he knew he had found his home and joined a small country mixed animal practice in Crittenden, whereupon soon after he met and married Melinda. Soon after Dr. Lloyd couldn’t help but feel like mixed animal practice was stretching him and his resources too thin, and feeling “like a jack of all trades, master of none.” In January 1989 Dr. Lloyd decided to limit his efforts exclusively to Companion Animals, or small mammalian pets such as dogs, cats, ferrets, guinea pigs, etc.

Gunther, Sher-Khan, and Tater Tot are the Lloyds’ three dogs, and a lone cat, Sully. Dr. Lloyd is married to Melinda and they have two children, Taylor and Benjamin. Dr. Lloyd enjoys photography, participating in grassroots automotive racing, and competition shooting when not taking care of his patients. Dr. Lloyd thoroughly enjoys all aspects of practicing Veterinary Medicine and feels “I don’t have to go to work in the morning; I get to go to work in the morning.” 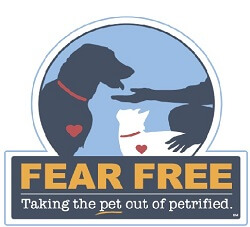 How Are We Doing?

review us!
Back to top